What bottle should you use to feed your baby?

With all the choices out there, parents often wonder if they have chosen the best bottle to feed their baby. Of course, like almost everything in child rearing, the answer is, “It depends.”

From my perspective as a tongue-tie specialist, I think that nipple shape and texture are the most important things. Whether a bottle is “good” or not depends on whether the infant can feed from it effectively. A tongue tie can dramatically affect which bottle a baby does best with.

When tongue tied babies first come to me, their parents have often tried multiple bottles. They usually have settled on the long thin or the grooved nipple seen in the first two examples below. Those happen to be the easiest for tongue tied babies to navigate.

Tongue tied babies have difficulty raising the backs of their tongues to be able to compress the nipple against the roof of the mouth. They also have trouble opening their mouths wide enough to get a good seal. Because they can’t open wide and elevate the back of the tongue, they tend to push the tongue forward and use their gums to bite, mash or nibble the tip of the nipple in a shallow latch. The baby may appear to be sucking, but she is really just pinching or mashing the nipple so milk will squirt out. This can be painful for the mother and, because there is no suction, the breast never gets completely drained. In this case, a bottle with a long thin nipple is easiest. Bottles don’t feel pain and they don’t require suction.

After releasing a tongue tie, I ask the mother to breastfeed exclusively for at least a week so she can retrain the infant at the breast. If that’s not possible, I ask them to switch to a bottle shaped more like the third example below, so the baby has to learn to use the tongue properly with a wide latch and a good seal.

This diagram shows a “good” and a “poor” latch. The problem is that if a baby has a tongue tie, she can’t open wide enough for the “good” latch and can’t lift her tongue up in the back to compress and draw in the nipple. Shallow is often all a tongue-tied baby can manage.

Biting is easier. Sucking takes energy using muscles that a tongue-tied baby has not used prior to the release. If allowed a choice between biting and sucking, babies will opt for the easiest way, and never learn to suck properly despite having had a tongue-tie release. That’s why retraining is so important after a release.

This diagram shows a “good” and a “poor” latch. The problem is that if a baby has a tongue tie, she can’t open wide enough for the “good” latch and can’t lift her tongue up in the back to compress and draw in the nipple. Shallow is often all a tongue-tied baby can manage.

After the release we can insist on a “good” wide latch. Then mother’s nipples feel better and, because there is now real suction rather than just nibbling, baby gets more milk and drains the breast.

With the nipple shown in the picture to the left, you can see that it would be easy to minimally open the mouth for a shallow latch using lips and gums to compress rather than truly sucking. This is why babies with tongue ties find this shape easier to use. Babies with tongue ties often have nursing blisters because they use their lips to “suck” rather than their tongue.

In the case of a tongue tie that has caused a baby to have a significant tongue thrust, even a long narrow nipple like the one above is difficult and they do better with one that is shaped so the baby can easily hold onto it by biting into a grove.You can see in the example how the design of the nipple allows for a shallow biting latch.

The same reasoning applies to pacifiers. A long narrow shape with or without a ridge for biting with the gums works best for infants that can’t open wide and who push their tongues forward rather than using a wide latch to create a seal and the back of the tongue to suck the nipple against the palate.

After releasing a tongue tie however, we want the baby to learn how to suck properly. That means we want to widen the latch to create a seal and change the habit of the tongue from pushing forward to moving up to the palate. In this case, a bottle with a short nipple and a more breast-like shape is best.

I’m not advocating for any specific brands, just describing the shape that seems to work best in pre- and post-tongue-tie release situations.

using lips and gums to

mash the nipple rather

than creating a seal and

sucking with the back

What bottle should you use to feed your baby?

Dogs and cats get tongue surgery too!

Even fish get laser surgery! 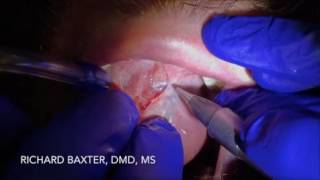 Drugs for reflux disease in infants may come with unintended consequences